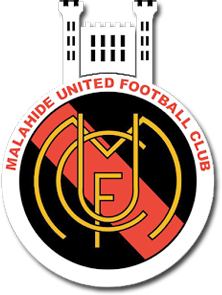 Malahide United A.F.C. was established in 1944.
The club is situated at Gannon Park, Malahide, Fingal, North Co. Dublin, Ireland. The club has over 1,200 registered players playing on over 50 teams and in two academies which makes the club one of the largest football clubs in Ireland.

The idea of forming a soccer club in Malahide was the brainchild of a gentleman named Herbie Troy back in 1943. Herbie was an employee of Guinness’s and arranged a challenge match between a Malahide selection and the brewery’s soccer side. The match was played in the grounds of Malahide Cricket Club in September 1943.

Following the match, a discussion took place in Jack Gibney’s pub where it was decided to form an official club and make application to the Athletic Union League. The application was made and accepted. The league officially kicked off in September 1944 with Malahide United a registered participant.

The first committee formed were Chairman, Pop O’Brien; Hon.Sec.R.H.Troy and Hon.Treasurer, Jas O’Brien. The first pitch was based in Ard Na Mara and the official club colours were red and white. The first competitive match was against Bray Wanderers which ended in a 9-0 defeat. However, revenge was sweet with Malahide beating Bray 5-3 in the reverse fixture in the final game, denying the Seagulls the title.

The club continued to progress up until the early 60’s when it was forced to disband due to low numbers. In 1969, four ambitious young men from Malahide Village, Ger O’Brien, John McKenna, Tony Gibney and Jimmy Gilmartin, met to discuss a plan to resurrect the club.

They decided to approach Lord Talbot to ask if they could have a section of land in the castle grounds for use as a home pitch. Lord Talbot was not keen on the use of the Castle Demesne and instead offered them some land on the Coast Road where he had several acres. This was gratefully accepted and application was made to the Amateur League to enter a team for the 1970/71 season. Malahide United was reborn.

Following the reformation of the club in 1970 a decision was made to change the club colours to red and black and a club crest was designed based on the Real Madrid template.

More change followed and to facilitate the building of Biscayne, the home ground was moved to Haughey’s estate opposite Kinsealy Church for one year. When the club returned they were moved further down the Coast Road. With the development of several new estates in Malahide and a growing population, a decision was made to form a schoolboy section in the club. By the end of the eighties there were four senior and twenty five schoolboy teams.

The senior team, competing in The Leinster Senior League, won their first LSL title in the 1996/97 season.

The club continued to progress at all levels and in 2002 the move was made to the existing facility in Gannon Park. Since then, present Club Chairman, Don Butler, has continually aimed to improve the infrastructure and give Malahide United players the best opportunities by providing the best facilities possible. Indeed in June 2018 a black tie event was held in the Grand Hotel Malahide to raise funds to install a second all-weather pitch in Gannon Park.

Thank you to all who have made a positive contribution to the development and success of Malahide United AFC over the past 75 years. May there be many more.

Malahide United A.F.C. was established in 1944 in Malahide, Fingal, North Co. Dublin, Ireland. The club has over 1,200 registered players playing on over 50 teams and in two academies which makes the club one of the largest football clubs in Ireland.